Shares of Starbucks (SBUX) have moved sharply higher off their February lows and managed to close a large downside gap. The gap was formed by a drop in the stock price in January, after the company reported disappointing same store sales. 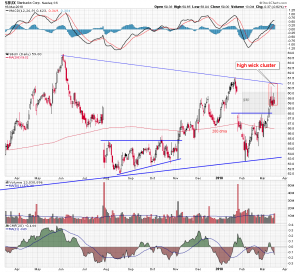 Price action over the last week formed a series of high wick candles. High wick or upper shadow candles are a condition of shooting star or some doji candles, and these candles are often bearish reversal warning signs.

They are formed after upside action in a stock is rejected and it closes lower, leaving the high upper wick. A cluster forms when there is a grouping of these candles. The number of candles in the group reflects multiple rejections and is that more bearish.

Bearish reversal candles often form after price has attained a particular technical level, like filling a gap or returning to a previous support-turned-resistance level. The suggestion is that the stock has completed the job it set out to do and now it is time for a pause or a pullback.

The recent high wick/low close price action is not yet reflected in the direction of the moving average convergence/divergence oscillator, but Chaikin money flow has moved into negative territory.

This support line and the downtrend resistance line drawn off the 2017 and 2018 highs, define a large multi-year symmetrical triangle that has been forming on this chart.