Last week SunPower Corporation (SPWR) filed a petition to be excluded from tariffs on solar-cells and panels developed in the US. If the company were granted an exemption, it would allow the savings to be spent on domestic manufacturing, which would ultimately be beneficial to the company’s bottom line. 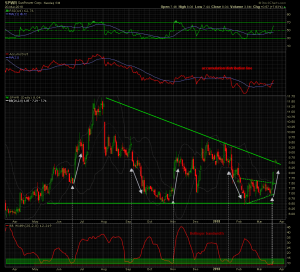 The stock has been making a series of lower highs for the last nine months above horizontal support in the $6.50 area, forming a large triangle pattern. After the recent February retest of that support SunPower shares have been further consolidating in a small symmetrical triangle or wedge.

The sharp 7.6% move higher in Tuesday’s session pierced through the wedge downtrend line, and the stock closed near its high of the day.

Both the relative strength index and the accumulation/distribution line moved up and through their 21 period signal averages. The Bollinger bandwidth indicator reading reflects extremely tight band compression. In the past, this level of compression has been followed by several days of volatile price action. This suggests the possibility for more upside in the stock price.

The small wedge projects to a price objective measured by taking the height of the pattern and adding it to the breakout level. It targets a break above the larger triangle pattern. A measured move off that larger pattern would take SunPower shares considerably higher.