The SPDR Gold Shares ETF (GLD) has been moving in a triangle formation for the last two months above horizontal support in the $124 area.

On Wednesday it broke above the triangle downtrend line and its 50 day moving average. Overall volume jumped higher and the Chaikin money flow index is firmly in positive territory. This suggests renewed investor interest in the precious metal. 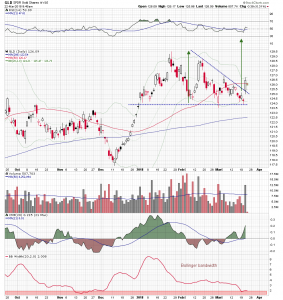 As the construction of the triangle pattern progressed the Bollinger bands have narrowed. Bollinger bandwidth is now at a level indicating very compressed band width.

The last time there was a similar reading was in December before the rally into this year. Prior to December it has been several years since the Bollinger bands were equally compressed.

Periods of tight range compression are often followed by a volatile resolution. This suggests that yesterday’s move is not over and the price of gold could be headed considerably higher.

The triangle projects a target price objective that would see the GLD make new highs for the year, and could take out the 2016 high.