On Wednesday the broader market averages opened flat and rallied through the morning. Then at about 2:00 PM a double top formed on the ten minute chart and the indices gave up all their gains, closing back down near the lows of the day.

The late day drop to opening levels formed long wick candles on the Dow Jones Industrial Average, the S&P 500 Index, and the NASDAQ Composite daily charts. These candles resemble shooting stars or gravestone dojis, with the long upper shadow, and the real body, or opening and closing range, situated at the bottom of the overall range. 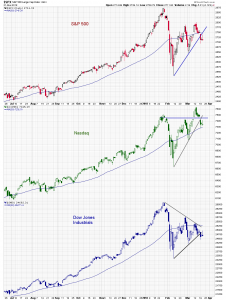 These types of candles are often seen at market tops, but if you look carefully at the three daily index charts you can see gravestone dojis and shooting stars that formed in the past, and were followed by moves higher.

What makes these current long wick candles a little different is that they have formed after trend line breakdowns or, in the case of the S&P 500 and the DJIA, after having broken below the 50 day moving average.

They become more suspect and another piece in the construction of the bear case for the broader market.

The gravestone-like doji candles that formed on the daily index charts on Wednesday were ominous looking. They turned out to be habingers of a brutal Thursday for the entire market.

So, what type of candles were left in the wake of Thursday’s broad market devastation, and what do they purport for the final trading day of the week?

Bearish marubozu candles formed on the S&P 500 Index, the Dow Jones Industrial Average, and the NASDAQ Composite charts in the Thursday session. These candles have only a “real” body, that is, they opened near their low and closed near their high, and have no upper wicks or lower tails. The reverse formation is true in the case of a bullish marubozo. 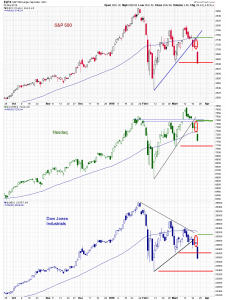 Thursday’s bearish or dark marubozo reflects selling pressure from the start of the session to the close. The obvious inference is that there will be follow-through selling on Friday. That seems likely, the DOW futures are down about 135 points as of 8:30 PM on Thursday night.

What would it take to shift the appearance of the weekly candles from their current bearish look to a more bullish profile?

Using the DOW chart for illustration, a close above the 24,250 level on Friday would be constructive. It would help to transform the decidedly bearish weekly marubozo into a rudimentary hammer candle. This could be interrupted as a bullish reversal candle, but it would require a nearly 300 point one-day rally in the industrial average.

The weekly candle is always an important piece of the price action puzzle. It will be particularly significant at the conclusion of trading this week.

If the market isn’t prepared to recover enough to form a strong weekly candle, as outlined last night, all is not lost. There is a daily outcome that could be constructive.

The best-case daily scenario – a Friday open at previous close, followed by a move lower in the morning, and then rally back up and over the open in afternoon. This would form a bullish hammer-like doji candle. The second step in a morningstar reversal formation.

This a lot of speculation, but if the weekly close does not form a hammer, the morningstar is another possible bullish outcome.