AMC Entertainment (AMC) dropped over 66% from its January 2017 high to its low just ten months later. Since last November, it has made a short series of higher highs under resistance in the $16 area, forming a triangle pattern.

Last week AMC successfully retested the uptrend line delineated by the higher lows. This week it followed up that action by bouncing sharply, taking out both the 50 and 200 day moving averages. Shares were up 7.7% in Tuesday’s session.

There is a 39% short interest in the stock. If it were to rally further, it could spark a covering rally. 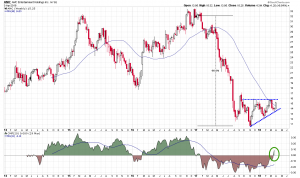 The weekly chart shows the five month basing process that followed the 2017 decline. There is a clear transition in the direction of price momentum, but equally important is the steady improvement in money flow. The Chaikin money flow indicator is moving into positive territory for the first time in over a year.

On the daily time frame, the triangle consolidation can be seen in detail. It looks like resistance in the $16 area will be retested again soon. If it is taken out, the pattern’s measured move, calculated by taking the height of the triangle and adding it to the breakout point, will take the stock price back up to the $21 area, and close the gap that formed in July 2017.

The relative strength indicator has moved above its center line but Chaikin money flow is still in negative territory. Money flow will have to improve to support the short covering rally scenario.