A series of narrow opening and closing range candles formed in January on the Apple chart. These candles are usually accompanied by long upper or lower shadows or both, and they reflect indecision on the part of market participants. A nearly 13% decline followed the bearish candle cluster. 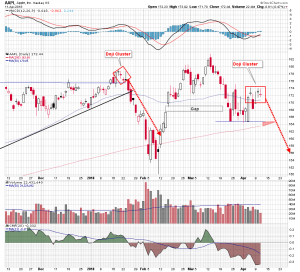 A similar cluster of doji-like candles has formed over the last five sessions on the daily chart, just above the flat 50 day moving average.

The moving average convergence/divergence oscillator has made a bullish crossover but is basically flat. Overall volume has been well below the 50 day moving average of volume this month, and Chaikin money flow is deep in negative territory.

Beneath the 200 day average are the February lows.