After making the high this year, they immediately began consolidating in a series of lower highs and higher lows. This price action formed a large symmetrical triangle pattern. 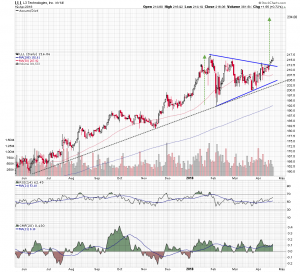 L3 broke above triangle resistance this week and is currently testing its all-time high.

A pattern price projection can be made by taking the base measurement of the triangle and adding it to a breakout level or subtracting it from the breakdown point.

This week’s breakout projects a price objective that targets to the $234 area or about a 10% move higher.