At this year’s Ira Sohn Conference, Doubleline CEO, Jeffrey Gundlach announced that the next big move for the markets will be in gold, stating, “It’s getting almost exciting…something big is happening.”

Specifically, he cited the five year inverse head and shoulders base that has been forming on the chart, noting “Gold is maintaining an upward pattern above its rising 200-day moving average, which is extremely good.”

According to Gundlach, the base breakout has “explosive, potential energy,” and “bond king’s” upside pattern price objective targets a $1,000 move in the precious metal.

This inverse head and shoulders base has not gone unnoticed by market technicians. 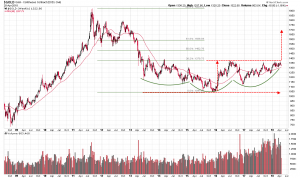 On the weekly chart of the Continuous Spot Gold Contract, the left shoulder of the pattern formed between 2013 and 2014, and the “head” low was made at the end of 2015, with the right shoulder developing in 2017. The 40 week moving average (approximate 200 day moving average) is included on the chart.

Neckline resistance is located at the 38% Fibonacci retracement level of the 2011 high and the 2105 low. We highlighted a similar long-term consolidation pattern on the SPDR Gold Shares ETF (GLD) as recently as last month here.

The pattern’s bullish target price is determined by taking the height of the pattern and then adding that measurement to the breakout point on the neckline. By our calculations this projects to the $1700 area or about a $350 move.

Mr. Gundlach may be taking the five year width of the pattern and adding it to the neckline. This projection seems a little on the high side.

Either way, a break above the head and shoulder neckline will be an important technical event. But like many technical events, it could be triggered by an external market event. That may have greater implications.

Historically, gold has been considered a safe haven in times of turmoil. So, while a breakout on the gold chart might be “exciting” and “explosive” in terms of a rally in the price of the precious metal, it may also have a darker side.