Home Depot (HD) shares are bouncing off weekly long-term support and breaking out of a short-term consolidation on the daily chart. This is a very bullish combination of multiple timeframe indications.

We noted this potential upside move earlier in the month here, but we did expect a bit more volatility when it did occur. That has not happened yet, but it still may. 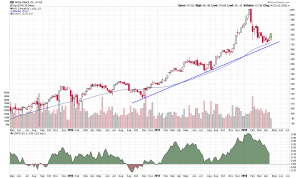 To recap: the stock has bounced off an uptrend line this month that has paralleled the rising 40 week moving average, since late 2016. Chaikin money flow on this weekly time frame is in positive territory. 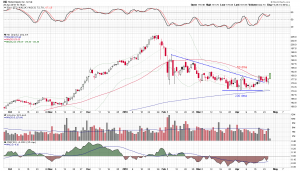 While Home Depot did pull back off its January high, creating a two month downtrend line on the daily chart, it found support just above its 200 day moving average. Then it began moving sideways.

This horizontal price action has penetrated the daily downtrend line and managed to move above the 50 day moving average. Today shares are up 2.4% at this point in the session and making a new breakout high.

Momentum is obviously improving and the Chaikin money flow indictor is tracking higher.

Home Depot looks like a good risk-reward long candidate at its current level.