Shares of Alphabet (GOOGL) are up over 30% since January 2017, even with this year’s 13% pullback off their January highs.

An impressive run but still the stock underperformed the Technology Select Sector SPDR Fund (XLK) by 7% in that time. It is also, the FANG component whose share price is under the most pressure this year. 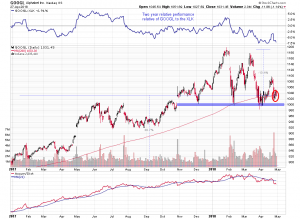 In Friday’s session Alphabet closed under its 200 day moving average. This is not the first time it has closed below this key technical average this year. It was retested over multiple days just last month. But by comparison, in 2017 it never tested the average, in fact, it never touched it or even came close.

Actually, last month it was not the 200 day moving average that ultimately supplied support. It was the $1000 level. As most technicians know, large round numbers have psychological properties that often attract or repel price moves.

If there is a post earnings sell-off next week and the big technology names that have powered this market for so long, start to fade, Alphabet will retest its $1000 level.

Will it hold again or give way to further downside is problematic. The trajectory of the accumulation/distribution line suggests that the stock is under distribution.