It was a difficult week for fundamental traders. It seemed like good earnings and the possibility of peace on the Korean peninsula could not drive the markets higher. Good news was bad news and that is bad news.

Let’s take a look at the charts of the major market indices for clarification.

The six month daily charts of the S&P 500 Index, the Dow Jones Industrial Average, and the NASDAQ composite all look similar in construction. They show a series of lower highs made this year, above either flat to slightly higher new lows, reflecting consolidation. Simple enough.

A closer look at the S&P chart we have been highlighting recently shows the pattern in more detail. 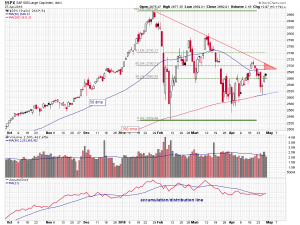 Bearish “Gravestone” Candles On The S&P 500, DJIA, And NASDAQ Charts

Gravestone doji candles formed on the weekly index charts last week. We noted them and their potential significance here. 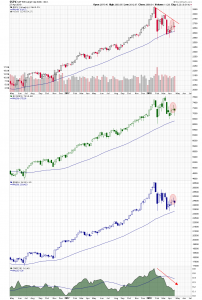 The message of the gravestone doji is that the bulls had early control, taking the index up to the high of the session. But at some point the bears wrestled back control and took it down into the close. It reflects a one day or, in this case, a one week transition in trader sentiment.

How do you tell the difference? You look at the candles within the context of the trend and the overall technical picture, but ultimately only time will tell.

The daily S&P chart is the primary pictograph to focus in on next week. It looks like the converging support and resistance lines are nearing their apex. A break out or breakdown is imminent and either one will have intermediate-to-long term effect on the markets.