The dollar’s decline off its 2009 high is captured on this monthly chart of the PowerShares DB US Dollar Index Bullish Fund (UUP).

As the long term decline accelerated a well-defined downtrend line formed between 20110 and 2014, along the path of the declining 40 week moving average.

In late 2014 both the average and trend line resistance were broken to the upside. With some pullbacks along the way, in January 2017 the UUP managed to recapture its old 2009 highs. 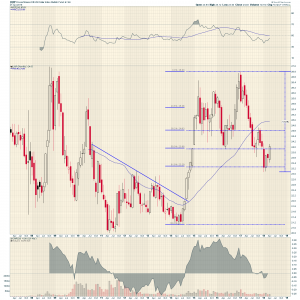 But the upward momentum shifted quickly and dramatically that month. The January high marked a top and the subsequent rapid drop in the value of the dollar took the fund down 14% by January of the next year.

Over the last three months, however, the UUP looks like it is in the very early stages of forming a base.

The price action of the last four years has defined support and resistance around the Fibonacci retracement levels measured off the 2014 low and the 2017 high.

So far, this month (there are two days to go before the candle is matured) the UUP is holding above the 50% level. Both the relative strength index and Chaikin money flow are below their center lines but turning back up. This reflects improvement in positive price and money flow momentum.

The basing action above this key Fibonacci level can be seen in more detail of the UUP daily chart. It began making a series of higher lows in February just below the $26.70 level, but unlike similar patterns in the past, this time it broke above the long term downtrend line.

Moving average convergence/divergence has made a bullish crossover and is tracking higher and above its center line. While the Chaikin money flow reading suggests renewed buying interest.

It’s likely there will be another pullback at some point in the near future, followed by and another period of horizontal consolidation. It takes a while to turn the long term trajectory of the US dollar, but it looks like the start of the process.