It is pretty difficult to look at the weekly chart of PayPal Holdings (PYPL) and not believe that the stock is making a major top.

There are several technical terms that could be used to describe the price action over the last six months on the weekly chart. It could be called a head and shoulders top with a complex right shoulder or a rounded top, even a declining triangle. 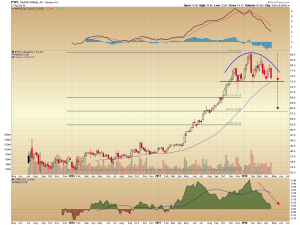 The point is that PayPal is undergoing some sort of transitional process and the integrity of the $72.50 support level, which is now intersecting with the 200 day moving average, is crucial to the intermediate term direction of the stock price.

Moving average convergence/divergence and Chaikin money flow have been tracking sharply lower since the top of the pattern formed early this year, reflecting the loss of positive price momentum and buying interest.

The topping pattern projects a downside price target that is calculated by taking the height of the pattern and subtracting it from the $72.50 support level. It targets a substantial decline to the $58.75 area or a 50% retracement of the historical range of the stock.

That would be a major decline, worthy of a major topping pattern. But first support line and the 200 day moving average have to be broken, and that has to be confirmed with follow-up price action. If this reinforced level of support holds then there is, of course, the possibility of a substantial bounce.

This may sound inconclusive to the uninitiated technical trader, and it is.

The idea behind technical analysis, however, is not to definitively predict the future but to outline possibilities, and be prepared as opportunity presents itself.