Amazon (AMZN) shares were up 3.6% on Friday but that simple statistic does not paint a complete technical picture. The position of the close relative to the open, as well as the direction of money flow is much more important.

The stock gapped open in Friday’s session but immediately began selling off, closing near its low of the day and forming a large dark candle on the chart.

While Amazon was up 3.6% on the session, it had been up as much as 7.9%, meaning that it saw a 4% pullback from that intraday high.

Daily volume was over 100% higher than the 50 day moving average of volume.

A higher daily stock price on nearly double the average volume is normally a good thing but in this case, it could be just the opposite. 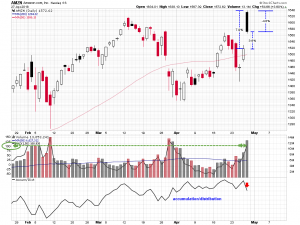 First off, the price action represents rejection, an inability to hold higher levels even for a short period of time. Secondly, the volume bar is indicated on the chart as being an up-volume day, but that was not the case.

The accumulation/distribution line developed by Marc Chaikin calculates money flow based on the daily close relative to its overall range. If the close is in the upper range of the candle it is considered positive, and is its in the lower range it is condidered negative volume. This is a better way of measuring money flow.

The implication for Amazon then is that neither price nor money flow justified the Friday pop in the share price. The stock will likely have to undergo so consolidation at lower levels, perhaps fill the upside gap.