Running late this morning, but here’s a few stocks on my radar this morning; good technicals and good charts: 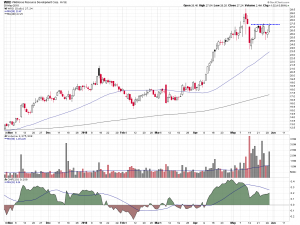 There are several ways to look at the S&P 500 Index and the Dow Industrial Average daily charts.

One view is that they are rolling over after breaking out of three-month triangle patterns and then failing to maintain upside momentum; another could be that they are bouncing between levels of support and resistance supplied by their respective 50 day moving averages and Fibonacci retracement levels; and finally they could be simply moving in the normal dynamic of higher highs and higher lows within the parameters of their rising channel patterns.

There is a lot going on on these charts, but the levels that should be watched most carefully are the “lower low” levels. On the DOW that level is 23,500 and on the S&P 500 index it is 2600.

Failure of these levels represents confirmation of failure of support for all of the multiple technical scenarios.

There are also upside levels to watch, of course, and potential bullish trading opportunities. The markets could continue to “chop” along as they have for several months, moving between trend lines, Fibonacci retracements, and moving averages before tracking higher. They could also reverse hard and quickly eclipse their March highs.

But profit protection is job one and the new low levels on the S&P 500 index and the DJIA should be watched carefully.

Tesla (TSLA) shares bounced off support near the $275 level in trading on Monday. This area is the lower end of a one month channel, with pattern resistance located at the $310 level.

The stock price moved higher in morning but then steadily faded through the afternoon. The advance reached about the mid-point of the channel pattern range, with the high of the day failing just below the declining 50 day moving average. The close was situated at the lower end of the daily overall range, back down near the open.

Tesla’s price action formed a shooting star-like candle on the chart. This candle represents the inability of the stock to hold at higher levels and suggests further weakness.

Moving average convergence /divergence is making a bearish crossover, reflecting recent downside momentum, and the accumulation/distribution line crossed under its 21 period signal line, which confirms the recent shift in the direction of money flow.

Tesla’s price action and current technical indications are suggesting that despite Monday’s restrained upside price action, in the short term, a break below channel support is more likely than a break above channel resistance.

A channel breakdown projects a downside pattern price objective that is measured by taking the height of the channel and subtracting it from the support line. It targets a new low for the year in the $240 area or about 12% more downside, which would also be a 62% Fibonacci retracement of Tesla’s 2016 low and 2017 high range.

Here are four charts of interest for this week. They all have positive upside momentum and money flow, along with well-defined levels of resistance. Breakouts from their respective patterns project significantly higher upside price targets.

A cup and handle on the Accenture (ACN) chart with large gap resistance just overhead. 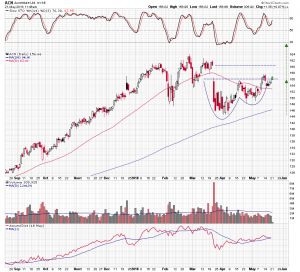 Air Products and Chemicals (APD) formed a large wedge or symmetrical triangle pattern on its chart, and the downtrend line is being tested.

The agricultural equipment stocks are breaking out of intermediate term consolidation patterns.

Take a look at the daily charts of Deere (DE) and CNH Industrial (CNHI):

Deere had been trading in a downward facing inverse head and shoulders pattern. The neckline of the pattern corresponded with the 50 day moving average and the head found support at the 200 day average. A big move on Friday took out neckline resistance and the stock is seeing good follow-up price action early in today’s session.

Price action over the last two months in CNHI formed a triangle pattern below horizontal resistance in the $12.60 area. It is breaking above that resistance decisively in trading this morning.

Finally, here is a chart of the VanEck Vectors Agribusiness ETF (MOO) which includes DE and CNHI along with stocks like Monsanto (MON), Archer Daniles Midland (ADM), Tyson Foods (TYN) and IDEXX Laboratories (IDXX). This fund is quietly up 60% since its low in 2016.

It has been consolidating in a large triangle formation this year, but now it looks like it is ready to return to its primary long term uptrend.

Thirteen was a key resistance level on the Volatility Index (VIX) chart in 2017, and the times when it was broken, the sixteen level contained any further advance.

The 13 level has proven to be an important key technical level again in 2018. The spike in volatility in February this year was followed by a sharp pullback. Ultimately, the index settled and began moving in a large range. Resistance was situated in the 25 to 26 area, and the prior resistance at the 13 level became support.

This month the “Fear Index” moved back down below its 200 day moving average to the lower end of the 2018 large range, that well-tested 13 level. In trading on Tuesday a bullish candle formed there, closing near its high and back above the 200 day average.

If the Volatility Index can get back above the 16 level, it would suggest that the 13 level was once again, successfully retested. And continued upside momentum could end up taking it back to the upper end of the large 2018 range, in the 25 area.

Here are two stocks that we are looking to play from the long side today.

The first is Gardner Denver Holdings (GDI) which makes scientific and technical instruments. Shares have been consolidating in an inverse head and shoulders continuation pattern for the last three months. Neckline resistance is situated in the $33.20 area and the stock price closed above it in Thursday’s session.

The H&S pattern projects an upside price objective that targets the old high made early this year.

The information technologies services company Accenture (ACN) is the second chart of interest. 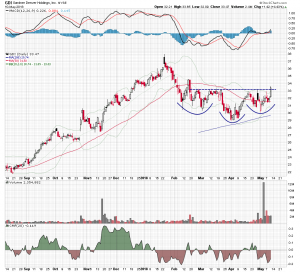 A cup and handle consolidation pattern has formed on this chart over the last two months, just below a downside gap. Rim line resistance is located at the $156 level and the stock closed slightly above it on Thursday.

The relative strength index has been tracking higher during the consolidation period in bullish divergence to price, and Chaikin money moved up into positive territory last month.

The cup and handle pattern has about a $5.00 upside target price, which, if achieved, would be a new all time high.

Bob Lang of Explosive Options made a timely call on three big name stocks, on the “Off The Charts” segment of Mad Money last night.

Adobe (ADBE) has been a relentless powerhouse of a stock over the last two years with shares up over 150% in that time. But like many other market out-performers it has been experiencing an increase in volatility over the last couple of months.

This volatile price action can be seen on the weekly chart as a series of high wick or long-tail candles. These candles represent indecision. The bulls can’t keep the stock price up and the bears can’t take it down.

On the daily time frame, recent price action in Adobe formed a rising triangle pattern with the uptrend line following the rising 50 day moving average and horizontal resistance in the $235 area.

As Adobe shares have been consolidating, the moving average convergence/divergence oscillator has been making lower highs, in bearish divergence to the stock price. This is not unexpected as the underlying moving averages used in the construction of the indicator flatten. It does, however, reflect an internal loss in upside momentum as Adobe shares near the apex of the triangle and an ultimate decision point.