They gapped higher at the open today and early in the session were up 2.25%. The dynamic changed around noon as Apple pulled back eventually closing near its opening print.

Technically, the price action today formed a “gravestone” doji. This is a one-day bearish reversal candle when it forms during a sharp uptrend. 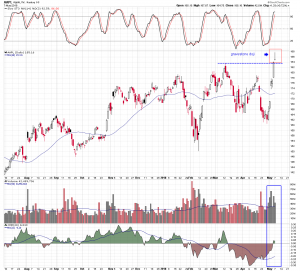 A normal doji has a narrow opening and closing range. The gravestone doji does too, but it is situated at the lower end of the overall price range. It is considered a bearish reversal sign when it forms during a rally.

If Apple were to gap down tomorrow it would create another colorfully named candlestick called an “abandoned baby” candle. This is actually a three period formation, consisting of a large white candle, followed by a gap-higher doji candle, and completed by a gap-lower large dark candle.

It is like an eveningstar candle pattern and represents a transition from bullishness to bearishness. But we are getting ahead of ourselves. The pattern first needs to form and there has to be follow-up confirmation.

At this point the gravestone doji alone is a rare but fairly reliable reversal candle. Traders holding long positions should remain alert.