The S&P 500 index has been making a series of lower highs and higher lows since the beginning of the year, forming a large symmetrical triangle pattern on its daily chart. 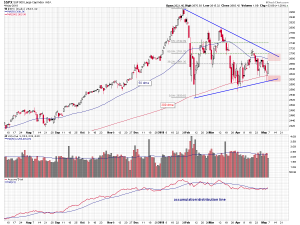 Resolution is just a matter of time, as these sets of indicators converge.

Obviously, a break above pattern resistance or below pattern support would be significant and either could determine the intermediate to long term direction of the market.