Doctor Copper finished a strong 2017 with a sharp rally into year end.

Since then, however, it has lost its upward momentum and made a series of lower highs on the chart. The price action this year looks like a symmetrical triangle or wedge. These are consolidation patterns which after completion often lead to a resumption of the trend. 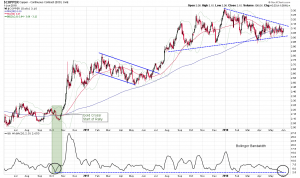 This may be the case with copper but one cautionary indication is the 50 day moving average crossing below the 200 day average in early May. This is called a “death cross” and is considered to be an intermediate to long-term bearish indication.

Of course, a death cross is not a sure thing. A confirmed triangle breakout or breakdown will likely determine the future direction of price, but in either case the move could be volatile.

Note the compression of the Bollinger bands. The reading on the Bollinger bandwidth indicator is the lowest or the tightest it has been since October 2016. It was followed by the 50 day moving average crossing above the 200 day average. This “gold cross” marked the start of the copper rally.

It is unclear at this point in time, which direction the triangle break will take. When that decision is made, however, the preliminary price compression on the chart suggests subsequent move will be highly volatile.