Take a look at the Hershey Foods (HSY) daily chart.

The stock has been under pressure since the end of 2017, trending lower beneath a declining 50 day moving average. But over the last few weeks it has been attempting to build a base, just above the $89 level and below the $93 level. 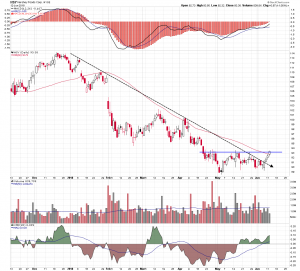 In Tuesday’s session it closed above its 50 day average and the $93 resistance level. It also closed near the high of the day. These are early signs that Hershey shares are attempting stabilize and reverse the process of lower highs and lower lows.

The daily MacD is overlaid on a weekly histogram of the oscillator. In this way it gives us an idea of both short and intermediate term momentum. It’s made a crossover on both time frames.

In addition, the Chaikin money flow indicator has crossed into positive territory. While overall volume is still light the money flow reading suggests that there is some buying interest in Hershey shares at their current price.

Confirmation of a true trend reversal requires follow-through price action, some testing of resistance-turned-support, and ultimately for the 50 day average to start tracking higher.