Shares of McDonalds (MCD) have labored to retrace the February drop in the stock price. In the four month process that followed they formed several consolidation patterns, depending how you draw the lines.

The first looked like an inverse head and shoulders formation, and then a complex right shoulder developed. After that, a small descending triangle pattern formed that also became the handle of a very large cup and handle pattern. 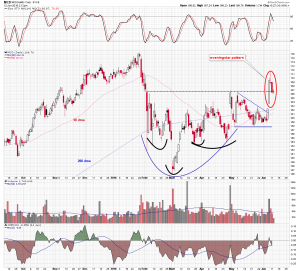 In any case, resistance seemed situated primarily in the $167 area. That level was broken decisively last week and it appeared McDonalds was on its way to making new highs. What has happened, however, is that a bearish reversal pattern has appeared on the chart and the stock price has retreated back below resistance.

The “eveningstar” pattern is a three-day bearish reversal pattern.

From Investopedia: An evening star is a bearish candlestick pattern consisting of three candles that have demonstrated the following characteristics: the first bar is a large white candlestick located within an uptrend; the middle bar is a small-bodied candle, red or white, that closes above the first white bar; and, the last bar is a large red candle that opens below the middle candle and closes near the center of the first bar’s body. This pattern is used by traders as an early indication the uptrend is about to reverse.

The eveningstar represents a transition from bullishness-to- bearishness.

The stochastic oscillator is making a negative crossover in an oversold zone, and the Chaikin money flow reading suggests the stock is not under accumulation.

McDonalds shares look vulnerable unless they can quickly recover and begin basing above the $167 level.