Apple (AAPL) is the largest holding in the Technology Select Sector SPDR ETF (XLK) and for the last two years the stock has consistently outperformed the fund as a whole.

This year Apple is under-performing it, not by much, but more recently it has lost its leadership role as a XLK component. Make no mistake, it is a great stock and is up 33% over the last year and 12% year-to-date.

But other major holdings of the fund like Miccrosoft (MSFT), Intel (INTC), Cisco (CSCO), and Visa (V) have been the dominant members of the technology fund this year.

What does this change suggest for Apple going into the second half of the year? We are not sure. But this lagging dynamic is the backdrop for a speculative short trade. 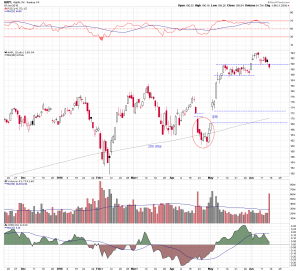 Apple shares gapped lower in late April, going on to make a bottom at the end of the month. Then in early May they gapped higher, and the two gaps created an island reversal bottom. At this point they began a sharp two week rally. That burst of energy was followed by a period of horizontal consolidation in the final two weeks of May.

Channel resistance was broken in the first week of June, but that momentum quickly faded. On Friday shares closed back below the $190 channel resistance-turned-support line. The relative strength indicator has dropped below its 21 period average and is close to breaking its center line. A reflection of the loss of positive momentum. Volume spiked higher and the accumulation/distribution line suggests that the stock was under selling pressure.

1. Apple shares have been under performing their technology peers.
2. The technical indicators reflect a loss in upside momentum and positive money flow.
3. The stock recently made a failed breakout.
4. The failed support level now becomes resistance and a nearby level to calculate a close percentage stop loss.
5. The horizontal channel bottom at $190 is the first level of potential downside, below after this there is little in the way of additional support until the 200 day moving average and the early May gap in the $168 area.

A stock like Apple can turn on a dime and quickly embarrass any analysis, fundamental or technical. But the trade is clearly defined and a has a solid risk/reward ratio. The only other requirement is the understanding that it is a short term speculative counter-trend trade, and requires disciplined money management.