Following up on yesterday’s post about trend line support on the major market index charts, three of the four index charts held above their respective uptrend lines.

These support lines drawn off the lows since early May were tested on the S&P 500 Index, the NASDAQ Composite Index, and the Russell 2000 Small Cap Index during the Tuesday session. Each of those indices managed to hold above their trend lines and close near the highs of the day. 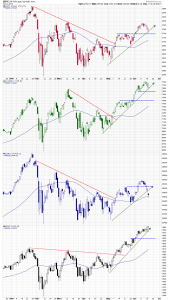 It was impressive action considering the pressure stocks were under at the open. The Russell even managed to make another all-time high.

The bad news is the Dow Jones Average failed Tuesday’s test but a bit of good news is the index was only down a little over a percent. It held at its 50 day moving average support and formed a hammer candle in the process.

While the move lower in the industrial stocks will get a lot of attention, it was a neutral day for the other sectors in the broader market. What will go relatively unnoticed are the strong closes and the support levels that held through the session.