A technical pattern has formed on the Micron Technology (MU) chart that projects a potential 12% move in the share price.

The stock rallied over 40% in May and this month it has been digesting those gains and consolidating in triangle pattern. The downtrend resistance line of the triangle was tested in Wednesday’s session and support is situated in the $57 area, which is also a 38% Fibonacci retracement of the May rally range. 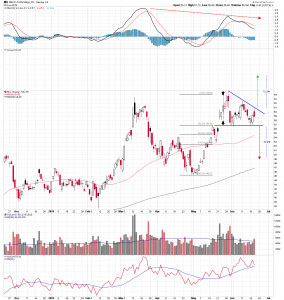 Micron closed near its session low today and on strong volume. The accumulation/distribution line reflects this selling pressure. Moving average convergence/divergence has made a bearish crossover and the oscillator is in slight negative divergence to the stock price.

Shares could be headed for a retest of triangle support but that remains to be seen. They could just as easily reverse, breakout and continue on trend, leaving the technical indicators to catch up. In fact, the latter is more likely, considering the inertia of the May move.

Breakout or breakdown, the pattern does project both an upside and downside target price. The measured move is calculated by taking the height of the triangle and either adding it to the breakout/resistance point or subtracting it from the breakdown/support line. In either case, it represents about a 12% move.

The integrity of the triangle pattern support and resistance lines should determine whether Micron makes a new multiyear high or a has a downside rendezvous with the 200 day moving average.