NVIDIA (NVDA) shares gapped lower at the open on June 25th, taking the stock price back below the 50 day moving average. It traded under the average but above a nearly one year uptrend line for the next nine days. 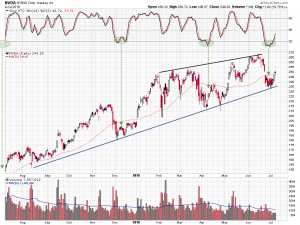 On Monday NVIDIA shares gapped higher at the open, leaving behind the nine day consolidation channel and recapturing the 50 day moving average. It looked like the price action had formed a bullish island reversal on the daily chart.

As it turned out, the downside gap was closed in the first hour of trading and the stock continued to weaken into mid-session.

In the second half of the session NVIDIA shares strengthened and closed near their highs, and just above the 50 day moving average. So, while the gap higher did not hold and the island reversal was negated, today’s price action did form a small bullish hammer candle.

The nine day consolidation above the long term uptrend line should be a base for an upside move that could retest the rising triangle on the daily chart.

That said, there was something unusual about the behavior of the semiconductors and technology shares in general in the first half of the session, and consequently when they did an about face and strengthened in the second half of trading. 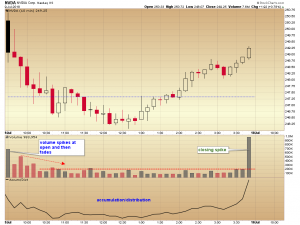 On the ten minute NVIDIA chart volume can be seen spiking on the gap open. But the enthusiasm quickly faded and the accumulation/distribution line suggests the opening buying then turned to selling. Volume was heavy in the first hour of trading but that moderated, along with money flow. Even as the stock price began to strengthen volume remained muted and didn’t pick up until the last half hour of the session.

Clearly the price action as reflected on the NVIDIA daily chart remains bullish. A long term trend line was successfully retested and a major moving average recaptured in the process. The internals of one half-session should not distract from the bigger picture.

But should the technical dynamics shift, the well-defined levels of chart support afford comfortable levels at which to place stops.