The S&P 500 Index has been making a well-defined series of higher highs and higher lows, since it bottomed in early April. A very bullish looking rising channel pattern has formed on the daily chart. 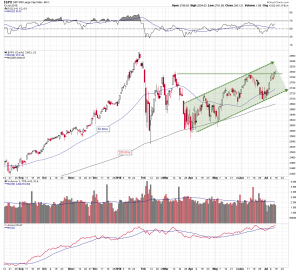 Friday’s close took out the February high, the relative strength index is tracking higher, volume is light but the direction of money flow is positive. It appears to be all good and perhaps it is.

There is one troubling aspect, however, not so much of the chart but of the index itself.

It is hard to believe but just three stocks, Amazon (AMZN), Netflix (NFLX), and Microsoft (MSFT) account for 70% of this year’s gains. Here is a link and a video:

These three companies are responsible for 70% of S&P gains from CNBC.

The influence of several big technology names is, to a large degree, determining the direction of the broader market.

Now take a look at the number of stocks in the S&P 500 that are above their 50 day moving average. 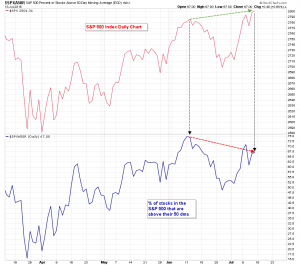 The takeaway is that several big tech names have hijacked the broader market.

All will be well as long as they can handle the load. The converse is also true. If one of these names should falter, the entire market is vulnerable.