The stock price has diverted widely from its 40 week moving average. On the daily chart the 50 day average is over 40% higher than the 200 day average. These diversions are the most in the history of the stock price. 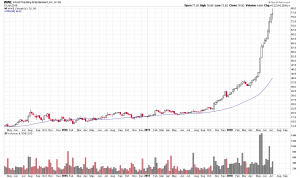 It’s impossible to say when a reversion to these means will occur but when it does it could be swift and volatile. It is important for those long WWE or those looking to enter from the short side to be vigilant for early warnings signs.

One such warning sign may have appeared on the charts this week. A large doji candle formed on both the daily and weekly time frames. These particular candles are called long legged dojis because their narrow opening and closing range is situated near the middle of a wide overall range.

Doji candles suggest investor indecision because the stock saw a lot of movement both higher and lower after the open, but it finished the session by closing exactly where it started.

These dojis often mark the tops of sharp rallies and are very often associated with blow-off tops.

Initial confirmation would require a break below the two month uptrend line on the World Wrestling Entertainment daily chart. Shorts should use tight disciplined stops because a stock with this type of upside momentum won’t go down without a fight.