Bitcoin has broken out of an inverse head and shoulders base and is tracking higher. The move is similar to the bullish action that began at the end of April this year and continued into early May.

It looks like Bitcoin will make an attempt at breaking through the longer term downtrend line that the May high helped define. If it were to penetrate that barrier, it could spark a second phase of cryptocurrency mania.

One way to trade any renewed interest in things crypto and block-chain related is through a proxy play. Overstock.com (OSTK) is one of these proxy stocks and it is breaking out of a bullish basing pattern of its own. 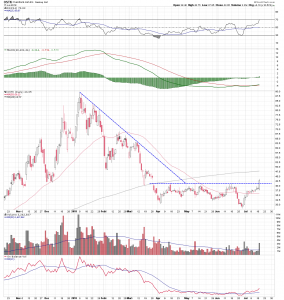 Overstock.com is an e-commerce company that is also developing cryptocurrency and blockchain projects. It’s stock price has been correlated with the movement in bitcoin shares.

Shares dropped sharply in the first quarter of this year. Then they began a four month period of consolidation under horizontal resistance in the $41 area. Overstock jumped over 10% in Tuesday’s session and penetrated the consolidation resistance line.