Herbalife Nutrition’s (HLF) stock price dropped sharply in late May after news that Carl Ichan had sold 10.5 million of his shares in the company. Since the announcement, the stock has traded back up before consolidating between contracting Bollinger bands.

This price compression has reached an extreme level, and a narrow horizontal channel has formed between the $55 level and the $53 level on the daily chart. 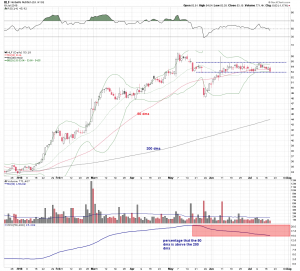 Periods of very low volatility like this one are often followed by a high volatility resolution. The “pressure” builds as the stock price is squeezed and then there is a “blow-off” break from the tight range. The move can be either up or down but it is usually a big one.

Herbalife’s former CEO Michael Johnson and current Executive Officer sold just under 850,000 shares of the stock on June 6, at $52.13 a share. The sale was valued at $44 million, well below the $552 million Ichan sale, but still significant.

The usual technical momentum and money flow indicators on the Herbalife chart are relatively neutral. But the graph at the bottom of the chart does suggest that this contraction phase may be resolved by a sharp downside move.

This is the largest diversion between the two averages since Herbalife has been trading, and everyone knows about reversion to the mean.

It’s all about timing. There is, very likely, a volatile move coming in the stock price and two of the major averages have diverted from each other by an historic margin. The technical inference is that Herbalife is headed lower and the move should be swift.