Tesla (TSLA) shares are up 28% in the last five days. They are currently flirting with the $390 level which marked the double top in the stock that we noted here last November.

This third test of resistance could be the charm and Tesla could break through to new highs. Or the $390 level could continue to act as a barrier. Then the advance in the stock price would be halted forming a triple top on the chart. 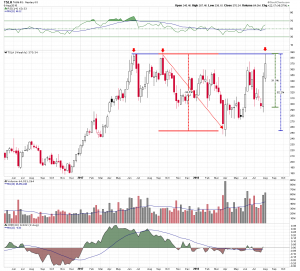 A bottom was made in April this year and by June shares had managed to get back up to the $360 area. This area had also been resistance earlier in the year and it held once again. The stock price retreated back to the $290 area.

Then came the Tesla earnings report this month and Elon’s apology on the subsequent call. The stock gapped higher the next day. This was followed by the recent tweet about potentially taking the company public. Tesla shares accelerated like only a Tesla can after that one.

The $390 level was touched in trading on Tuesday and again on Wednesday but each time the stock pulled back off those session highs.

So the obvious question now is: are Tesla shares headed for new all-time highs or in the process of making a triple top?

From a technical perspective the $390 level should be formidable resistance, considering it was the double top level last year. But the price momentum indicators are tracking higher while volume has spiked and money flow is turning positive.

If the upside momentum continues and the $390 level is taken out, then the mysterious $420 level is the first upside target. This $420 level was also mentioned in another Musk tweet.

If shares pull back off the triple top resistance level then the nearby $360 former-resistance area should become support. If that level were to fail, the July $290 low is the next downside target and below that the $260 April low.

The dynamism of Elon Musk’s personality has been powering Tesla’s share price. But monitor the support and resistance levels as outlined on the chart, ultimately price action around these levels will map Tesla’s journey.