I bought some ProShares UltraShort QQQ (QID) at the close on Monday. At this early point in the Turesday trading session, it looks like I should have waited to make the buy. Stops are in place and I’ll evaluate the traded as it progresses. The thinking behind the trade is still intact and it centers around the FANG stock charts.

Facebook (FB) shares are still reeling from the hit they took last month. They had managed to get back above their 200 day moving average early last week. but faded on Friday. Facebook closed under the average on Monday and at the lower end of its trading range. This price action formed a high-wick doji, or narrow opening and closing range, candle. 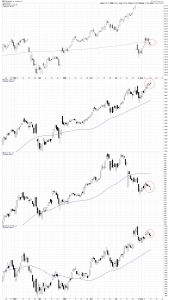 Amazon (AMZN) is the only one of the FANG group to make a new high this month, but an ominous “gravestone” doji formed on its chart on Monday. This candle has a narrow opening and closing range that is positioned at the bottom of the overall candle range. Its implication is obvious: price could not hold its highs of the day and retreated back to where its started.

It seems unusual to say but Netflix (NFLX) shares have been trending lower. A bearish shooting star candle formed on its chart on Monday. One formed on the Alphabet (GOOGL) chart. This candle has the same negative connotation as the shooting star or the gravestone doji.

A single day’s candle does not a trend make and I may have been early on this trade. But I’m in the position and now all efforts are on monitoring the position, making adjustments to the stop if necessary, and basically managing any potential loss.

If it turns out to be profitable, that’s good, too.