There is a close correlation between the movement in the stock price of Electronic Arts (EA) and the price action in NVIDIA (NVDA) shares.

This is not surprising, NVIDIA chips are used in gaming processors and by cloud-based gaming streaming services, and Electronic Arts is a major supplier of content and services for game consoles and streaming service providers.

But this relationship could help in gaming a trade around today’s NVIDIA earnings report. 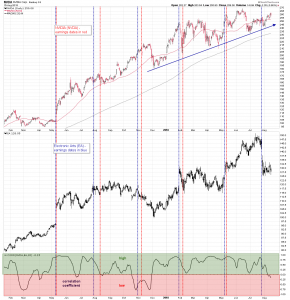 Electronic Arts usually files their own earnings report just days before NVDIA. The blue lines on the chart are prior reporting days for EA and the red lines the following NVDA reporting days. In its most recent July 27 report, EA beat estimates but lowered forward guidance. The stock price was punished severely, down double digits in the days immediately after, and it has yet to recover.

NVIDIA shares dropped below their 50 day moving average in sympathy but held a long standing uptrend line. They bounced off the trendline, recovered the average, and have tracked higher going into today’s report. The correlation coefficient indicator has moved into negative territory reflecting the diversion between the two stock prices.

A reversion towards a closer correlation would seem likely. The price action in Electronics Arts shares has been the leading indicator. The implication then is NVIDIA shares should move lower following their Thursday earnings report.

One caveat, note the reaction in NVDIA shares after the late October 2017 Electronic Arts report. EA shares moved lower after the company reported and continued lower into the end of November. NVIDIA dropped the day after it reported in early November but bounced higher the following day. Shares continued higher for the next two weeks before they reversed and headed sharply lower into early December. In December both stocks had returned to their normal positive price correlation.