Cummins (CMI) rallied over 160% from early 2016 to early 2018. Then it quickly reversed course and began a seven month decline that saw it retrace 50% of its rally range. 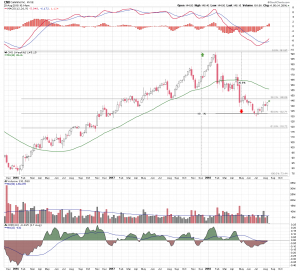 It bounced off that 50% retracement level this month situated at the $132 level and moved back up to the 38% retracement level. On the weekly chart the MacD can be seen making a bullish crossover and Chaikin money flow is moving into positive territory. These indications reflect positive price momentum and money flow. 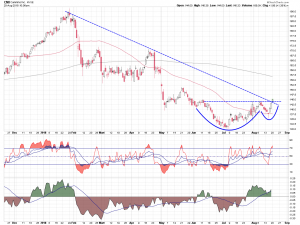 Cummins has been basing on the daily chart above $132 in what has developed into a cup and handle pattern, with rim line resistance in the $143.50 area. The relative strength index on this time frame is tracking higher and the Chaikin money flow indicator suggests the stock is under accumulation.

Today the stock price is breaking above the intersection of resistance defined by the cup and handle rim line and the downtrend line drawn off the highs of the year. The pattern projects an upside price objective measured by taking the depth of the cup and adding it to the rim. It target’s a return to the 200 day moving average which is currently located in the $156 area.