The major stock market indices have moved back up to challenge their all-time highs. The Russell 2000 Small Cap Index broke out to new highs today, piercing through the upper end of a rising triangle pattern and closing near its highs of the session.

The S&P 500 index and the Nasdaq Composite are right at or approaching their former highs, but the Dow Jones Industrials, the early leader in this recent phase of the longer term rally, still has some work to do.

On close observation though the S&P chart is a bit concerning, at least for the short term. 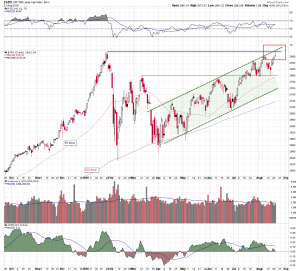 The daily chart shows the index moving higher since early April, within the confines of a rising channel pattern. It successfully retested the March 2800 high level several times, and then continued on to its seemingly appointed meeting with its January 2018 high.

That January 2018 all-time high level is currently intersecting with the four month rising channel resistance line. Today it was tested and the S&P backed off, forming a gravestone-like doji candle on the chart.

A gravestone doji is a candle with a narrow opening and closing range situated at the bottom of its overall range. It reflects a failure to hold its higher level and is sometimes seen at tops.

It would be ludicrous to infer from one-day of suspect price action that a market top is in place. But it may not be as easy as some think to penetrate and, more importantly, sustain these new high levels. It could take several failed attempts.

Take another look at the block of index charts and note how close the support lines are to their current prices. If there were multiple failed attempts to breakout and one of the resulting pullbacks took the S&P or one of the other indices (including the Russell), back through its nearby support level, the technical picture would take a bearish turn.

Just a reminder that a successful breakout requires confirmation. Generally, it needs several days of upside action or a successful retest of the breakout resistance-turned-support line. Trust but verify.