The ProShares UltraShort QQQ (QID) tracks the double inverse or -200% performance of the Nasdaq 100. It has been tracking lower as the Nasdaq has been attempting to make new highs.

While the QID has been making lower highs it has not been making lower lows. A short-term base has developed around the $37 level, and the combination has formed a descending triangle pattern on the daily chart. 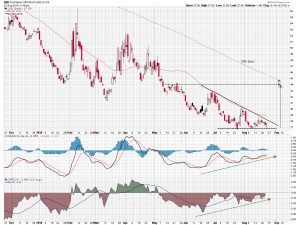 The moving average convergence/divergence indicator (MacD) has been in bullish divergence to the fund price for the last two months. This is an indication of underlying upside momentum.

If the QID were to bounce off its $37 base and break above the downtrend line, the triangle pattern’s measured upside move targets the $44 area. This would also intersect with the declining 200 day moving average.

There is an inherent risk associated with trading any multiple inverse fund, but there is also the potential for added reward. So, a good risk/reward scenario represents opportunity.

The nearby levels of current resistance (entry point) and support (stop loss level) on the daily QID chart, define a low risk/reward set-up.

It should be understood that this would be a highly speculative and potentially volatile trade. It requires a clear and disciplined trading plan.

Remember that preservation of capital is job one.