Live Nation Entertainment (LYV) promotes and operates live music events. If you take a look at the fundamentals of the company you might not be impressed. But from a short term technical perspective the chart is a potential “blockbuster.” 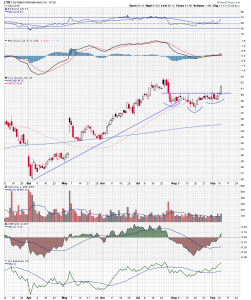 Price action in April formed a large island reversl, first gapping lower at the beginning of the month, and then gapping higher in early May. The stock continued higher, with the 50 and 200 day moving averages making a “gold cross” in June, and finally peaking in August.

Live Nation shares pulled back below the uptrend line and managed to oscillate around the 50 day average, preventing any further decline. What developed from this was an inverse head and shoulders continuation pattern, with neckline resistance in the $50.25 area.

The relative strength index has crossed above its 21 period signal average and its center line, and moving average convergence/divergence made a bullish crossover and is above its center line. These are indications of increasing positive momentum and short term trend direction.

Money flow is improving along with price momentum. Chaikin money flow has moved into positive territory suggesting new buying interest, and on balance volume is well above its 21 period signal average.

Live Nation was up 2.3% in Tuesday’s session, breaking through the inverse H&S neckline and closing near the high of the session. At this point it looks positioned to make a run at the July all-time high, and the pattern offers a good risk/reward trading set-up.