If you’re looking for a speculative trade, it might be time to take a look at the GoPro (GPRO) weekly chart.

The decline in GoPro’s market capitalization and the near 90% collapse its the share price over the last four years is well known. There is no fundamental logic for taking a long position in the stock. There is, however, a technical rationale for a short-term speculative trade. 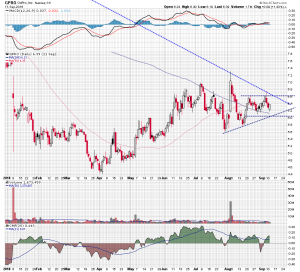 The weekly chart is highlighted with a two year downtrend line and includes the 10 and 40 week moving averages. GoPro shares are currently above the 40 week average and retesting the trendline.

The relative strength index has been tracking higher ever since it moved out of its oversold zone earlier in the year. This reflects some level of positive momentum in the stock.

Chaikin money flow has also been steadily moving higher and is in positive territory. This suggests renewed buying interest and that shares are under accumulation.

There is a 22% short interest in the stock and the traders that have made money taking this position, may cover if the stock shows some sign of strength.

Similar technical dynamics were in place on the GoPro chart in June 2016 and they provided a profitable short term trading opportunity; they could again.

The edge in this case, is the nearby breakout level supplied by the downtrend line, and the close stop loss levels below the 10 or 40 week moving averages. These present a good risk/reward speculative short-term set-up, but remember — capital preservation is job one.