Red Hat (RHT) shares dropped sharply in June. They made a low in the $132.50 area later in the month and then began to oscillate around the rising 200 day moving average.

A triangle pattern developed below a static horizontal resistance line in the $150 area. In Wednesday’s session a small hammer candle penetrated triangle resistance. 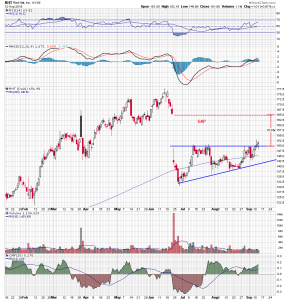 Money flow has also been very positive this month. The Chaikin money flow indicator is well into its upper zone, suggesting strong buying interest in the stock.

It looks like Red Hat is in the early stages of an attempt to close the large downside gap. If it were to achieve that goal it would represent a 10% upside move.