There are technical indications on several retail sector stocks that suggest their strong run may be coming to an end.

Take a look at the daily Kohls (KSS) chart. In August the stock began tracking higher above a well-defined uptrend line. The trend line was tested last week and in Monday’s session it was broken. The stock price closed just below the June high. 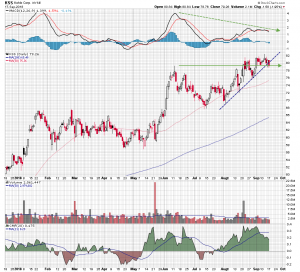 Moving average convergence/divergence has been in bearish divergence to price since it made the June high. Chaikin money flow is still in positive territory but its upward trajectory has shifted this month, and it is well below its 21 period signal average.

There is similar looking price action on the weekly chart of Macys (M), except that its rally began at the end of 2017. The share price has more than doubled since then and the stock may be in the process of absorbing those gains. 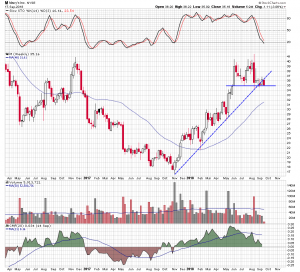 Macys’ shares began moving sideways in May above horizontal support in the $35 area. They have been retesting that support for over a month. The stochastic oscillator has dropped sharply during this time, as well as overall volume, and Chaikin money flow is close to entering negative territory.

After a more than a one year rally, Polo Ralph Lauren (RL) shares are also testing an important trend line. Over the summer several high wick candles formed on the chart. These represent failed attempts to hold higher price levels. The stock is again retesting a rising support line, currently situated in the $130-$131 area. 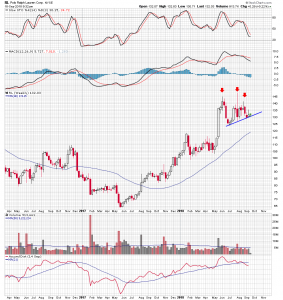 Moving average convergence/divergence has made a bearish crossover, the stochastic oscillator is below its center line, and the accumulation/distribution line is under its 21 period signal average.

Retail may rebound off these support levels but a more healthy response might be for a pause and consolidation, even if that means a minor pullback, before a resumption of their uptrend.