Netflix (NFLX) shares have been consolidating under resistance at $380 for the last two months. 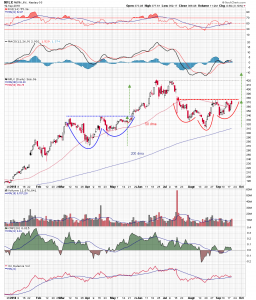 A break above $380 neckline resistance suggests an upside price target measured by taking the height of the pattern, and adding it to the neckline. In this case, it projects about 65 points higher to the $450 level, which would be a new all-time high for the stock.

Netflix consolidated in a similar way over the summer. That time it formed a cup and handle continuation pattern. The subsequent breakout met its projected measured move and took the stock price to its current all-time high.

The technical indications in place now suggest a successful breakout from the inverse head and shoulders pattern.

Chaikin money flow has been oscillating around its center line and the accumulation/distribution line is above its slightly uptrending 21 period average. Money flow is neutral to fairly positive.

Netflix shares formed a large white candle in Tuesday’s session and closed back above their 50 day moving average. In trading on Wednesday a hammer candle formed and it looks like the stock is poised for a run at neckline resistance.

An upper candle close above the $380 level confirms a pattern breakout which could initiate a run to new highs.