An eveningstar pattern has formed on the Dow Jones Industrial (DJIA) Average daily chart. This three–day candle pattern is considered a bearish reversal formation and is often seen at important tops. 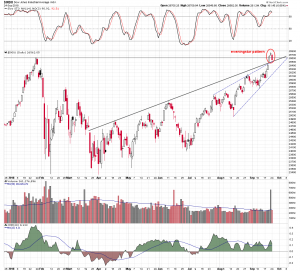 The eveneningstar consists of a large white or up-day candle, followed by a narrow opening and closing range “doji” candle, and completed by a large dark or down-day candle. It represents a transition in investor sentiment from bullishness-to-bearishness.

The industrials have been a leader in the recent march to new highs. If they begin to lose momentum, which sector would be the next to take on the leadership role?

Technology has been fading, the bond proxy consumer staples are facing competition form the increase in interest rates, to which there has been little positive reaction from the financial stocks.