We noted the bearish “eveningstar” reversal pattern on the Dow chart in a posting before the open yesterday. Here’s the link. 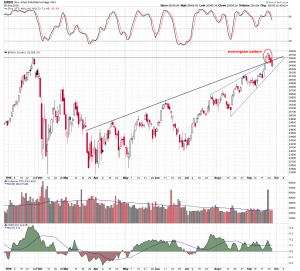 But early in the Wednesday session, the technology sector looked like it was going to takeover the leadership role from the industrials, and keep the broader market momentum going. The big name tech names were off and running in morning trading but then came the Federal Reserve statement. 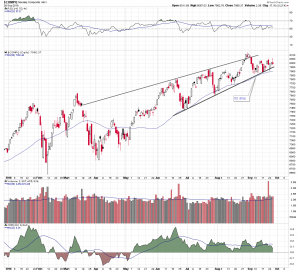 In the first minutes after the announcement the indices were up, then just as quickly they began to fade. In the last hour of Wednesday trading they dropped sharply, with the DJIA down triple digits, and the NASDAQ Composite Index forming a high wick candle on its daily chart.

The high wick or upper shadow candle is called a shooting star in candlestick charting parlance. It suggests that an index or security is unable to hold upper price levels and may be feeling some degree of exhaustion. 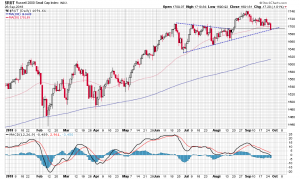 A large dark body candle formed on the the Russell 2000 Index daily chart, which penetrated below the 50 day moving average. The S&P 500 Index finished near its low of the session and back below its August high. 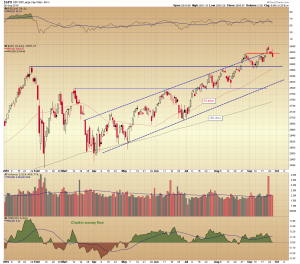 Wednesday’s candles are just one day of price action. While they finished at session lows and at interesting technical levels, they could just as easily bounce back tomorrow. The weekly close and the weekly candle are key to our analysis.

There is two more days of input needed before those candles mature.