NVIDIA (NVDA) shares having been tracking higher above a long term uptrend line going back to the end of last year. The uptrend line is being shadowed by the rising 200 day moving average, adding additional technical support.

In August, the stock broke above an interior resistance line situated at $260 on the daily chart. It went on to make another new high at $285. 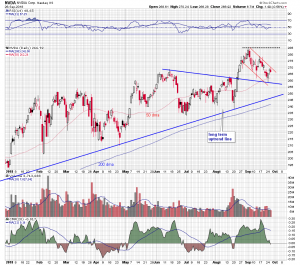 Since making that high, however, it has faded back to the $260 former resistance-turned-support level, which is currently intersecting with the 50 day moving average.

A hammer candle formed after the retest on Monday followed by two days of weak but positive price action.

In order for NVIDIA shares to fully reverse their September fade, they have to break out of the declining channel they have been moving lower in. So, to do that positive price momentum has to pick up and money flow has to remain positive.

Ultimately, NVIDIA needs to close above the $270 level which is the current channel resistance level. The $260 area remains support for now.