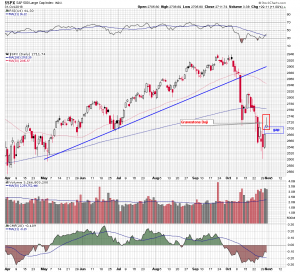 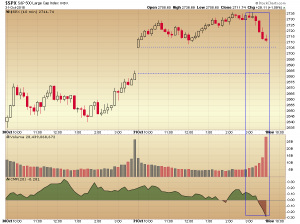 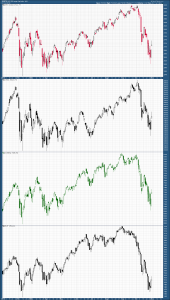 Bob Lang’s technical take on the broader market was featured on the “Off the Charts” segment of Mad Money last night. Bob, of ExplosiveOptions.net, said the charts of the S&P 500, Nasdaq 100 and Russell 2000 suggest the stock market could still have more downside.

Cramer summed it up: “The charts of the major indices, as interpreted by Bob Lang, suggest we’re not out of the woods, Lang thinks we could have a lot more downside.”

The stock price moved above its 200 day moving average in August last year and began a one year ascent that saw a 54% gain. But since making an all-time high this year shares have pulled back sharply and returned to test the long term average. 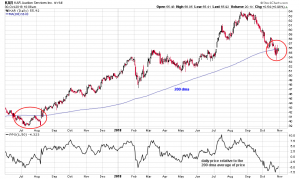 This week KAR shares have been struggling to recapture the 200 day average, and there are some early technical signs that suggest this test will be successful. 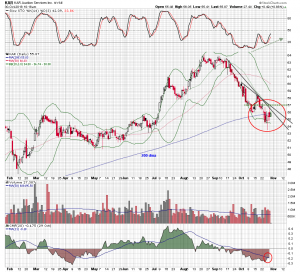 A large hammer candle formed on the daily chart at the end of trading last week. A hammer is a bottoming candle.

The stochastic oscillator has moved out of an oversold condition and is tracking higher. This is in opposition to the stock price which has been lower, and is a bullish momentum divergence.

Also, Chaikin money flow is in negative territory but trying to move above its 21 period signal average.

There is still work to be done as far as price is concerned. The most important job is for KAR shares to trade back above the confluence of overhead trend line resistance. An upper candle close above the $57 level takes the stock price back into upper Bollinger band range and would suggest a bottom was in place.

These four retail stocks look poised to make a move towards the upper end of the channel patterns they have been consolidating in for the last month. Money flow indications (not shown) are positive. 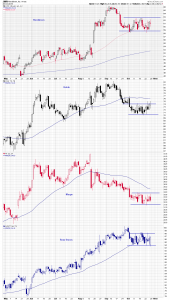 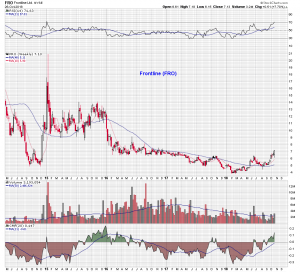 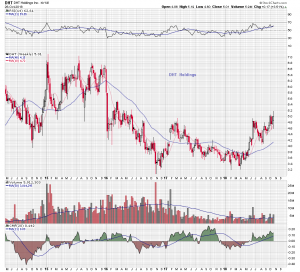 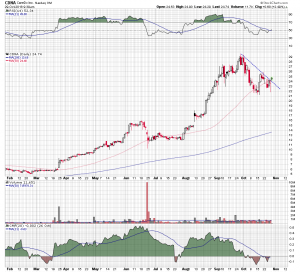 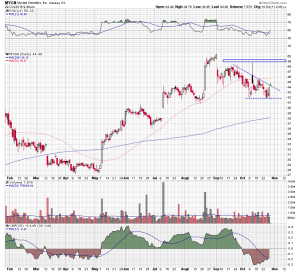 Tractor Supply (TSCO) has an improving technical picture and is making new all time highs. It’s a good risk/reward trade. 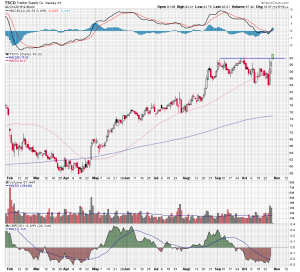 Watch for upcoming earnings reporting. We do not recommend holding trading positions into earnings.

Most important thing to watch next week from CNBC.

At the end of Friday’s show the Fast Money team was asked what they would be focused on next week. Watch the video, we think they are spot on. Below is a quick synopsis of their remarks and charts of the stocks and the index mentioned.

Tim Seymour said he was watching the action in the US Dollar. He said a breakout above the $96.70 level would be dangerous for commodity prices and the economy.

The dollar looks like it has already broken out of an inverse head and shoulders pattern on the weekly chart. The neckline is situated in the $95 area, and was broken first in August this year, and retested and broken a second time this month. This action formed a complex right shoulder.

Further upside specifically through Seymour’s $96.70 resistance level, would confirm a head and shoulders base is in place. This would set the tone for the direction of the dollar over the longer term. 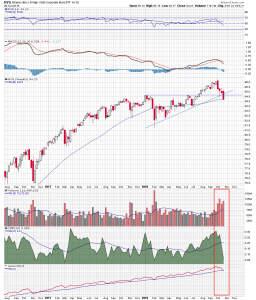 Brian Kelly noted the complacency in the high yield bond market. He’s watching the iShares $ High Yield Corporate Bond ETF (HYG) chart. Its been moving higher for most of the year in opposition to government bond yields. “Beeks” thinks either the bond market or the stock market has things wrong.

This week the HYG broke down through the uptrend line that has defined this year’s advance, and closed right on its 40 week moving average. Of note are the volume and money flow indications. Overall volume spiked considerably over the last four weeks, as the HYG started to trade lower. Chaikin money flow dropped sharply in that time, and the accumulation/distribution line has moved below its 21 period signal average. 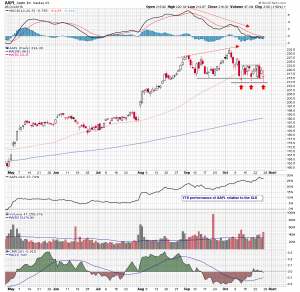 Steve Grasso highlighted the recent stable price action in Apple (APPL) shares. We’ve also noted how it has held up above the $215 level. Now it looks like three long tailed candles have formed what could be a double bottom.

The weakness in the overall market began with cracks in the technology sector. Grasso believes that if Apple fades it would be the “death knell” for the overall market. Let’s call $212.50 support on the daily chart and $22.50 resistance. 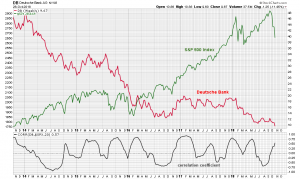 Finaly, Guy Adami repeated his read on Deutsche Bank (DB). He feels that European banks, particularly DB, have been telegraphing a message that the US markets are just now getting. He said to watch how DB trades next week as a further tell on our markets.

The weekly chart of Deutsche Bank relative to the S&P 500 Index hasn’t shown any real correlation until just recently, but its worth keeping an eye on.

The NASDAQ Composite was down a substantial 4.4% in Wednesday’s session. It’s been headed lower since the beginning of the month, and is down 12% total in that time.

There have been two similar percentage downdrafts this year.

The NASDAQ dropped about 11% from peak to trough in February and about the same percentage in early April. After the February pullback a large hammer candle formed just above an uptrend line (dashed red) drawn off several important 2017 lows. Then in April a morningstar pattern formed above the same uptrend line. The morningstar is a three period bullish reversal pattern (explained in detail here). The reversals also occured just above the 200 day moving average. 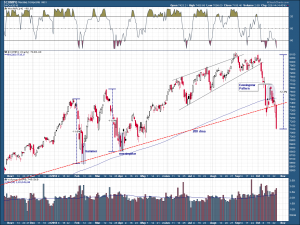 Currently, the NASDAQ is below both its 200 day moving average and the long term uptrend line. Those support levels are gone and there is little in the way of technical support in the nearby area. So what should we key on now.

The only option left is to be particularly alert to the daily price action. If the past repeats the drop in the NASDAQ based on the previous percentage declines, may be just about over. Now we have to monitor the chart for one day bullish reversal candles or multiple day reversal formations. We will.

The Dow, S&P 500, and NASDAQ Composite, have dropped down this morning to areas of support on their weekly charts. These areas are delineated by uptrend lines drawn off the August 2017 low and the lows of February and April this year. The NAZ is currently in the process of testing its trend line.

Unfortunately, the Russell 2000 Index took out its weekly uptrend line last week and is currently trading below last week’s low.

We speculated yesterday that the first phases of a morningstar pattern could be forming on the weekly charts. That scenario is not completely invalidated. If this mornings lows hold and the indices are able to build on that success into the end of the week, the movement would form rudimentary morningstar patterns. But that is projecting too far out into the future.

Right now the markets have to continue to moderate in these early hours of the session and stay quiet into the close. At this point that is what investors should do, too.

Carter Worth,of Cornerstone Macro, on a classical signal that’s showing more pain ahead for stocks. He breaks down what the transport sell-off means for the broader market on CNBC’s “Fast Money.”

Chartmaster breaks down what transports sell-off means for market from CNBC.

The market is opening relatively flat this week. That could be a good thing from a technical perspective.

On October 18, we noted that a series of eveningstar candles formed on the daily charts of the major market indices. This pattern represents a transition from bullishness to bearishness.

By the the end of that week, large high wick doji candles had formed on the weekly time frame. They had been proceeded by a long dark down-week candle the previous week. 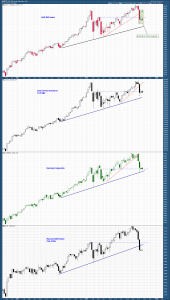 Some readers already know where we’re going with this. A large down week, followed by a narrow opening and closing range week, are the first two stages of a morningstar formation. The third and final stage would be a large white or up-day candle. Today’s flat opening keeps that option in play. If the market had gapped higher or quickly dropped lower the morningstar would be out of play.

The morningstar has the opposite implication of an eveningstar. It reflects a shift in sentiment from bearishness to bullishness.

So, on the daily time frame we have an eveningstar but on the weekly time frame there is the potential for a morningstar.

The weekly pattern has a long time to develop but holding last week’s low area is important.

Keep your fingers crossed and eyes on the charts. 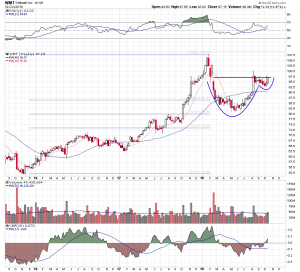 But Walmart showed its resiliency and since the retracement it has managed to fight its way back to the $97.50 level. The price action this year, the pullback and partial recovery, has created a large cup and handle formation on the weekly chart. The handle portion of the pattern formed just above the 40 week moving average and just below $97.50 rim line resistance.

The weekly relative strength index crossed above its 21 moving average near the bottom of the cup. This reflects the improving long term momentum. Chaikin money flow has been also been improving, suggesting increasing buying interest in the stock.

On the daily time frame, Walmart shares broke above a declining triangle downtrend line this month. They have twice retested resistance in the $97.50 area (the weekly cup and handle rim line) and once retested triangle resistance-turned -support. 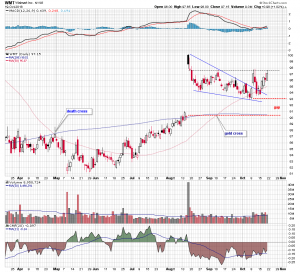 Daily moving average convergence/divergence is making a bullish crossover above its centerline. This is a sign of improving positive price momentum and short term trend direction. The 50 day moving average made a “gold cross” above the 200 day average in September. This is considered an intermediate to long term bullish signal.

Chaikin money flow on this time frame has crossed above its 21 day moving average, but is still in negative territory.

Another potential negative is the large downside gap that has yet to be completely filled. The lower end of the gap is also the current position of the flat 200 day moving average.

Several high wick candles have formed after retests of the $97.50 area, which is not particularly bullish. But well defined lines of resistance and support, the $97.50 area the $94 to $93 area respectively, are in place. These are the levels to watch on the daily chart going forward.

If Walmart shares breakout above $97.50, the weekly cup and handle pattern projects a large upside move. The old highs would be taken out and a 15 point measured move gain to the $112.50 would be the upside objective.

A breakdown on the other hand, first fills the vacant gap, and at that point, the future intermediate term direction of the stock price would rest on the support strength of the 200 day moving average.