The Global X Robotics & Artificial Intelligence ETF (BOTZ) gives the retail investor an opportunity to gain exposure to the artificial intelligence and robotics space. It has assets of just $2 billion and holdings in companies engaged in industrial robotics and automation, non-industrial robots, and autonomous vehicles. 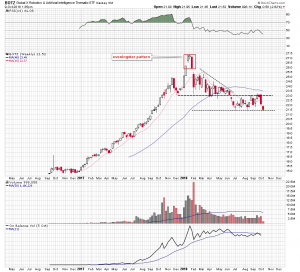 The stock price made a high early this year of $27.28 but quickly changed direction after a rudimentary eveningstar pattern formed on the weekly chart. An eveningstar is a three-day candle pattern that consists of a large up-day candle, followed by a narrow opening and closing range candle (doji candle), and completed by a large down-day candle. It represents a shift in investor sentiment from bullishness to bearishness, and is considered a reliable bearish reversal formation.

After the eveningstar formed the fund began making a series of lower highs above horizontal resistance at $23.00 area. This triangle support was broken in June, and BOTZ shares began trading in a horizontal channel. Channel support in the $21.50 area is currently being retested. 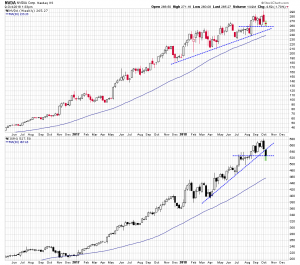 The BOTZ channel support line is well delineated at $21.50 and it would be a logical place for the fund price to bounce. This could be classified as an actual robot uprising.