The market dropped sharply in the last week of January and the first week of February this year. It experienced a similar sell-off in the first two weeks of October. But if history repeats we should see a bounce in the Dow Jones Industrial Average, the NASDAQ, and the S&P 500 next week. The math suggests that the rebounds could be substantial.

Take a look at the weekly charts of these major market indices. 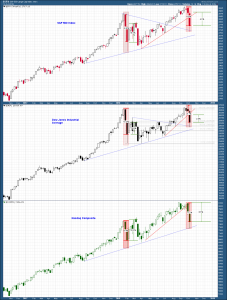 The S&P 500 dropped 8.8% from its open in the last week of January to its close in the first week of February. The peak to through decline was greater but we are using opening and closing prices for this analysis.

The very next week it saw a strong reversal and a month later it had recovered 6.6% of its earlier loss. That is a relative gain of 4.4%.

The February sell-off saw the DOW decline 10% and then rebound 4.4% a month later. This is a 2.8% relative gain. These relative gains levels are important to keep in mind.

On the NAZ chart, the February decline was about 9%, but the index bounced sharply higher over the next month. In the first week of March it was up 10% from the February low close and made a new high.

All of the rebounds in these indices were followed by pullbacks of their own. In each case, they turned out to be successful retests of their February low areas and then they continued higher.

What does this tell us about the early October drop we just experienced, and a potential recovery?

First off, this analysis is based on the assumption there is some market strength next week. It is simply another way of targeting a potential upside objective area. Like all technical measured move techniques, it has no real predictive ability. It is another tool that may be helpful in constructing a trading plan.

That said, if we use the same math that we did to measure the percentage recoveries in February and apply it to the numbers for October, we can arrive at upside objectives of equal percentage ratios.

The S&P 500 index rebounded 6.6% from its closing low in February. That translates to a 4.5% rebound in the index from its current close. Again, if we see follow through next week.

The February rebound in the DOW was 4.8%. Apply the ratio of that recovery to current conditions and it implies a 2.8% move higher.

Finally, the NASDAQ recovered all and an additional percent of its February drop. If you look at how the numbers figure relative to the recent move, a future rebound would be 8.5%. A sharply higher jump, for sure, but only enough to retest its old highs, not make new ones. Traders would probably take that right about now.

This has been a very optimistic exercise. The next trading day is a Monday and that has ominous overtones of its own. But these types of sharp rebounds have been pretty common in the past, and even if they are short lived, it would be an opportunity to reevaluate positions.