A follower on Twitter suggested we take a look at the Alibaba Group (BABA) chart. The stock is in a severely oversold condition and diverged sharply from its Amazon (AMZN) counterpart.

The weekly chart shows just how much selling the stock has experienced after making a June high this year. Since then it has retraced 50% of its historic range.

Alibaba was trading at $210 at its high and four months later, last Thursday’s low, it traded at $135. That is a 37% decline in share value. But after opening lower on Thursday it bounced sharply higher that same day, and followed through with a further gain in Friday’s session. So, let’s take a look at the daily chart.

On the daily time frame, the rapid stair-step decline can be seen in detail. The 50 day moving average crossed below the 200 day average in August. This is called a lead or death cross, and often signals a shift in a major trend. 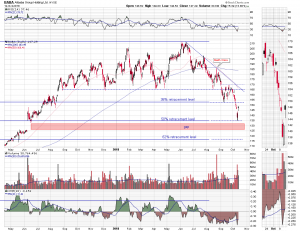 Last week the drop in the broad market saw BABA shares break through their 38% retracement level and continue lower before finding support at the 50% level. The Thursday reversal here was significant and formed a large white “filled” candle. It opened on its low, saw a large move to the upside, and closed near its high. It was followed up on Friday with a gap higher hammer candle.

The relative strength index is moving out of an oversold condition. It hadn’t been as oversold as it was since 2015. Downside volume at the beginning of last week was well above the 50 day moving average of volume, but upside volume on Thursday and Friday was also, above the average.

There is no guarantee that the trajectory of Alibaba shares will continue with as much velocity as it had over the last two trading sessions. The 50% retracement level may have to be retested and there is the magnetic downside pull of the open gap in the $130 area. But, in addition to the price action and the RSI reading, the Chaikin money flow indicator, while still in negative territory, is back above its 21 day moving average. This represents the first sign that the stock is seeing some buying interest.

At this point, a pullback could be a good risk/reward long entry point for a trade. But confirmation of a true trend reversal will require some basing action above the $152.50 or 38% retracement level, and ultimately, a break above the downtrend line drawn off the highs since June.