There are a number of things to like about the daily Apple (APPL) chart. The first is it hasn’t collapsed like the rest of the big technology names.

That is, the trajectory of the stock price has been basically sideways. Primary levels of support have held. Apple shares have been trading around their 50 day moving average. Positive money flow is improving, suggesting new buying interest. This is all good. 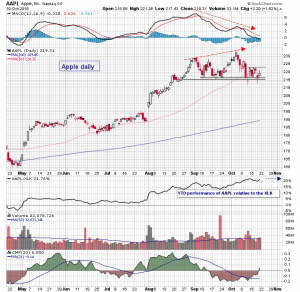 There are, of course, some negatives that are apparent on the daily Apple chart. The stock is down just over 5% from its high this year. Moving average convergence/divergence has been in bearish divergence to price, since the beginning of the consolidation period that began last month. Money flow did go negative for most of that time, but as mentioned, it is now back in positive territory.

Apple has massively outperformed the broader technology sector. Its year-to-date performance is 18% greater than that of the Technology Select Sector SPDR Fund (XLK). There is no reason to believe it will not continue to outperform.

There are clearly defined bands of support in the $215 level. They will likely be tested if there is further weakness in the tech space. There is also a defined level of resistance $223 which, if broken, could see the stock make a move towards its recent highs.

The technology sector has been under tremendous pressure over the last several months. No stock has been immune. But despite that pressure, and potentially negative news out of China, Apple shares have managed to hold after only a small initial decline.

The Apple chart as it stands right now is the best looking of the big technology names.

Larry Page is backing Silicon Valley start-up Opener, which has joined the growing number of companies attempting to bring “flying cars” to the masses. Opener’s vehicle, called BlackFly, can’t actually drive on roads. However, the single-passenger electric aircraft can operate autonomously, and you don’t need a pilot’s license to fly one.

This ‘flying car’ backed by Google’s Larry Page doesn’t require a pilot’s license to fly and will cost the same as an SUV from CNBC.

Tony Dwyer, Canaccord Genuity, says the correction is not over yet. But is it time to buy the dip? He discusses that option with CNBC’s Melissa Lee and the Fast Money traders.

The biggest bull on Wall Street says the market corrections isn’t over yet from CNBC. 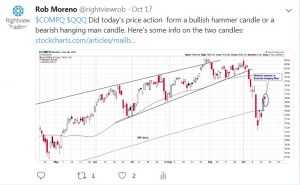 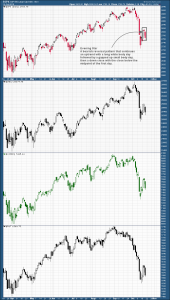 There was a clear sign that a bounce-back rally was in the cards after the sharp market sell-off.

Last week’s sell-off took the number of stocks in the S&P 500 Index that were above their 50 day moving average down to just 15%. That is an extremely low percentage indicative of a broadly oversold condition. A reading that low is usually followed by sharp rebound rally.

That’s what happened this week.

Here are some stocks to watch that are on our 50 day bounce list:

In strongly trending markets overbought/oversold oscillators like the Stochastic oscillator are not very helpful. But in markets that are seeing some volatility or are trading sideways they can be very useful in a technical analysis. 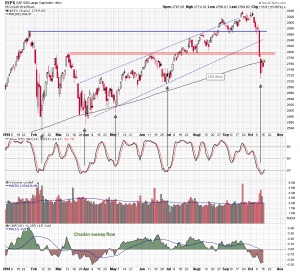 The S&P 500 index has been moving jumping around its 200 day moving average for the last four days. At this early point in Tuesday’s session it recaptured and is holding above the average.

The stochastic oscillator is at a level that, in the past, has prefaced sharp reversal bounces. Those reversals have taken several days and even weeks to evolve.

If the S&P were to break sharply below its 200 day average and continue lower, than the stochastic oscillator would remain oversold. Momentum oscillators can stay in overbought or oversold conditions for a very long time.

But if we see a bounce off the 200 day moving average look to the stochastic oscillator, volume, and the Chaikin money flow indicator for information as to the move’s sustainability.

The Foot Locker (FL) weekly chart illustrates the laborious climb the stock has made since November last year.

It has been a process of sharp upside moves followed by deep downside retreats. A two step up and one step back pattern. This movement has taken place, generally, between the Fibonacci retracement levels of last year’s range.

In January 2017, Foot Locker shares completed a triple top formation and then spent the rest of the year in free-fall. They dropped over 60% before finding support in the $27.50 area.

That’s where the awkward recovery process began and the retracement levels have been both support and resistance along the way. Now it looks like the current downtrend line is being broken and the stock is ready to begin another period of upside. 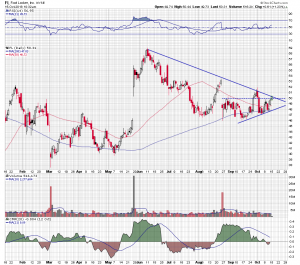 On the daily Foot Locker chart, the most recent pullback can be seen filling the open gap at $46, which is also the 62% retracement level on the weekly chart. Shares have moved over the merging 50 day and 200 day moving averages and they should help supply future support.

Now the next obstacle is the downtrend line drawn off the highs since June, and then the $51 level, which is the 50% weekly Fibonacci retracement level.

The price and money flow momentum indicators are flat. These readings are a reflection of the compression in range as FL shares have approached the apex of the triangle pattern.

An upside break out appears imminent but a sustained move will require an increase in positive money flow.

The footwear retailer is going to pay its next dividend on Oct. 18.

A follower on Twitter suggested we take a look at the Alibaba Group (BABA) chart. The stock is in a severely oversold condition and diverged sharply from its Amazon (AMZN) counterpart.

The weekly chart shows just how much selling the stock has experienced after making a June high this year. Since then it has retraced 50% of its historic range.

Alibaba was trading at $210 at its high and four months later, last Thursday’s low, it traded at $135. That is a 37% decline in share value. But after opening lower on Thursday it bounced sharply higher that same day, and followed through with a further gain in Friday’s session. So, let’s take a look at the daily chart.

On the daily time frame, the rapid stair-step decline can be seen in detail. The 50 day moving average crossed below the 200 day average in August. This is called a lead or death cross, and often signals a shift in a major trend.

Last week the drop in the broad market saw BABA shares break through their 38% retracement level and continue lower before finding support at the 50% level. The Thursday reversal here was significant and formed a large white “filled” candle. It opened on its low, saw a large move to the upside, and closed near its high. It was followed up on Friday with a gap higher hammer candle.

The relative strength index is moving out of an oversold condition. It hadn’t been as oversold as it was since 2015. Downside volume at the beginning of last week was well above the 50 day moving average of volume, but upside volume on Thursday and Friday was also, above the average.

There is no guarantee that the trajectory of Alibaba shares will continue with as much velocity as it had over the last two trading sessions. The 50% retracement level may have to be retested and there is the magnetic downside pull of the open gap in the $130 area. But, in addition to the price action and the RSI reading, the Chaikin money flow indicator, while still in negative territory, is back above its 21 day moving average. This represents the first sign that the stock is seeing some buying interest.

At this point, a pullback could be a good risk/reward long entry point for a trade. But confirmation of a true trend reversal will require some basing action above the $152.50 or 38% retracement level, and ultimately, a break above the downtrend line drawn off the highs since June.

On Friday’s “Fast Money”: The “Chart Master” Carter Worth of Cornerstone Macro, gives his technical insight on whether this recent market reaction is a breakout or a bull trap.

The market moves this week could be the definition of a bull trap: Technician from CNBC.