Microsoft (MFST) shares have seen wide daily price swings this month, but unfortunately the intraday action has played out as the stock made a series of lower highs. 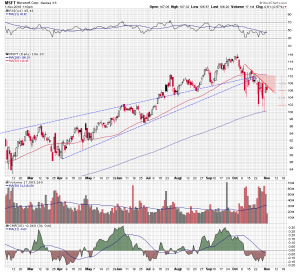 This trend began when the 50 day moving average and an intersection of uptrend lines were broken two weeks ago. A weak bounce followed that took Microsoft shares back up above the 50 day average and the apex of the intersecting trend lines. They were unable to hold above the $111 area more than a day, and quickly resumed their decline.

A clearly defined downtrend line has been resistance this month, and a quick test of the 200 day moving average last week supplied support. The loss in price momentum is reflected in the reading on the relative strength indicator. Microsoft shares have been under selling pressure and the distribution is illustrated on the Chaikin money flow indicator.

But we all know the price action this week in the technology sector will likely be defined by Apple’s earnings report after the close today. There is an implied move in Apple shares of about 4% post-earnings, either up or down.

Of course, it is unlikely Microsoft will move that directly with the price of Apple shares. It does make sense, however, to watch the follow-up price movement that takes place within these two averages next week.