The Apple (AAPL) earnings report after the close on Thursday took the company’s share price down modestly. It was the call that followed which dealt a heavier blow. The after-hours close saw the stock price down $14.41, a drop of nearly 6.5% from its regular session close.

Well into the call, CFO Luca Maestri mentioned that effective immediately, Apple would end its policy of breaking out iPhone, iPad and Mac unit volumes in their earnings reporting. In the company’s opinion unit sales figures are getting in the way of where the real focus should be, which is the growth in services revenue.

Unit sale volumes of the iPhone is the primary metric of most analysts. This change to the company’s reporting is being viewed by the market as an attempt to hide slowing iPhone demand.

Apple’s has been the one big technology name bucking the downdraft in the sector. But now Apple is likely to be a catalyst that puts further pressure on the space.

The weakness which has continued in pre-market trading this morning indicates a regular session open that will take out an important support level. 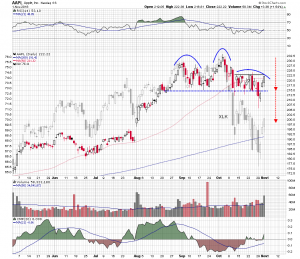 The daily chart shows Apple shares trading sideways in October, while the Technology Select Sector SPDR ETF saw a sharp decline in its share price. But now what looked like positive horizontal consolidation looks ominously like a potential head and shoulders top, with a complex right shoulder. The neckline of the formation would be situated in the $215 area and will be broken by the lower open today, at this moment around the $209 level.

The head and shoulders pattern projects a measured move that takes Apple’s share price back down to the $200 area, which is about 10% below Thursday’s closing price.