A particular bearish pattern has defined the last three highs on the Dow Jones Industrial average, and another may be forming again on the daily chart.

The early October high was a turning point for the market. It ended the intermediate term uptrend off the July low, and has been followed by nearly two months of volatile price action. 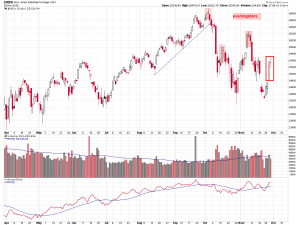 An eveningstar pattern formed at the October top. It is a three-day bearish reversal candle pattern that consists of a large up-day candle, followed by a narrow opening and closing range “doji” candle, and completed by a large down-day candle. The eveningstar represents a transition in trader sentiment from bullishness to bearishness.

The Dow’s early October eveningstar high was followed a sudden and sharp 6% drop, and then a 3% pop. The bounce only lasted a few days and ended with the formation of another eveningstar pattern. After this second eveningstar the industrial average dropped another 6% and the cycle began again.

The November high briefly penetrated the 26200 as it formed the second candle of an eveningstar top. After the third candle in the pattern formed, the Dow, once again, dropped a little over 6%.

Wednesday’s Powell rally formed a large white candle on the daily chart, but the market took a break on Thursday and closed right about where it opened creating a near perfect “doji” candle. So the first two elements of a fourth eveningstar pattern are now in place.

If a large down-day candle forms in the Friday session there will be a fifth eveningstar on the DJIA chart. Another 6% decline like there has been after previous eveningstars would take the average back below the 24000 level.

Of course, when patterns become overly apparent they stop repeating. But be aware of the possibility of another abrupt market reversal. The pattern may also be developing on the S&P 500 chart. 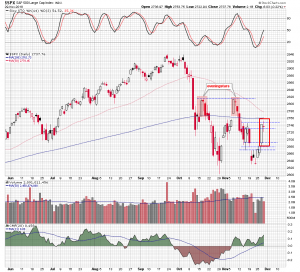